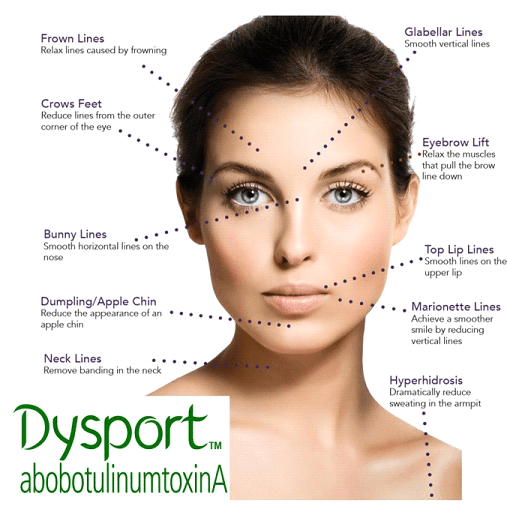 Enhance your look with Dysport.

Prescription Dysport is an injection used to temporarily improve the look of your moderate to severe frown lines without changing the look of your whole face. The untreated facial muscles still work normally, allowing you to freely show facial expressions, such as smiling, in untreated areas.
Dysport is a formulation that has been shown to deliver temporary improvement in moderate to severe frown lines, even with repeat treatments. So, the effect of repeat treatment with Dysport may be comparable to your first use.
How does Dysport work?

With just 1 injection into each of 5 points between and over the eyebrows, Dysport blocks the signal from the nerve to the muscles, ultimately resulting in a reduction of muscle activity and temporarily preventing contraction of the muscles that cause frown lines. You should not be treated with Dysport more frequently than every 90 days.

Treatment with prescription Dysport can temporarily improve the look of your moderate to severe frown lines. Treatment generally takes just 10 to 20 minutes.

Office Hours
Get in touch